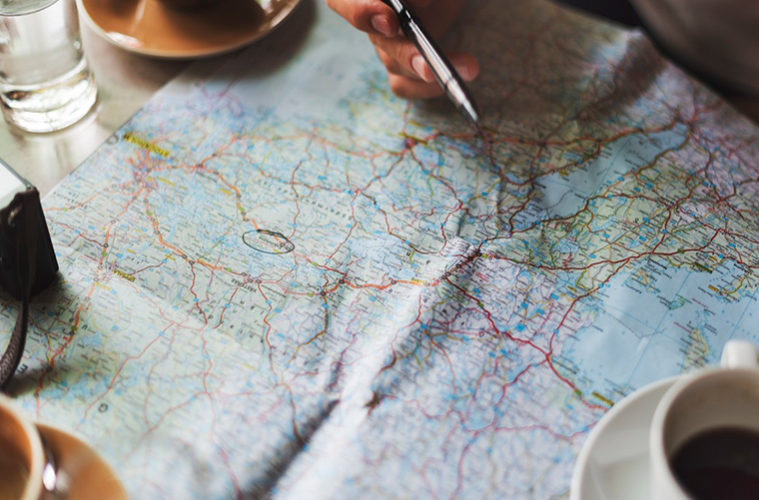 3 ways to track the way you travel

From those whose diligence encroaches on obsession to those simply wishing to boast on Facebook, travellers often have a need to display or record exactly where and when they have been on their own personal journeys. In an age of geotagging, movement tracking and mobile apps, it’s sometimes useful to be reminded of the simpler methods of such record-keeping that rely a little more on attention to detail for more rewarding results. Here are 3 ways to track the way you travel.

The Scratch Map in many ways defines one of the primary goals for many travellers in the 21st Century… showing off. Whilst the concept seems somewhat old-fashioned, taking the removable layer off a map coated with the same material as your corner shop lotto card, the fact that this form of visual representation is sold in trendy retailers spanning the internet and high street indicates a target audience of gap year students, youthful adventurers and far flung flyers. The size of such maps means that only the broadest of claims can be made, lending itself to the ever-popular trend of generalising a trip to Melbourne as having conquered the entirety of Australia or claiming London, Paris and Dublin constitute ‘the whole of Europe’. Even with the most accurate of hands and a miniscule 5p coin, travellers can only over estimate their own endeavours by scratching hundreds of square miles around their visited international cities. However, as far as cost and ease of use goes, the Scratch Map provides perhaps the most readily available format for travellers to remember the extent of their travels whilst also allowing onlookers, in the form of family members, friends and guests, to lament or admire the feats of their beloved.

Beyond the use of searching for the nearest coffee-chain or popular clothing store, Google’s Earth software allows for in-depth analytics based around travelling on a more diligent, geographic level. For those really wanting to get to the nitty gritty of their travels from an entirely personal perspective, the program offers hundreds of options for place-marking, path-laying, route-measuring and graphics-displaying, giving users an opportunity to paint a thoroughly accurate picture of where life has taken them over a finite time period. The result, after an initial setup period spanning days or weeks, can be something current, portable and changeable in the form of a .kmz file, which can relay thousands of locations and display them in a number of formats in a file size measurable in KB. Sharing such information, both casually and formally, is aided by Google’s My Maps feature which can display .kmz files online and gives users the ability to embed them on websites or share them electronically by email, messaging or social media. Ultimately, the process requires a certainly level of IT competence, constant updating depending on preference and an initial commitment of time to setup, but the result is something far more satisfying and personable than formats such as the above.

Sometimes, the simplest ways really are the best. Whilst the art of map reading is one slowly fading towards the clutches of technology, physical maps themselves still evoke a romance and tangible format through which to admire your surroundings. Purists may cringe at the idea of annotating pristine Ordinance Survey maps in order to track progress on hikes, bike rides and road trips and with the increasing cost of maps in high street stores, it does seem a waste undoing cartographers hard work with a trusty biro. However, for the use of recording routes and shading in towns and cities, second hand maps do just as good a job. Charity shops provide the ideal outlet for tatty, older issues both domestically and internationally with maps as recent as only 5 years old being knocked down to as little as £1. With this in mind, one can feasibly catalogue travels on a variety of scales offering perhaps what the Scratch Map cannot, from an international level right down to individual footpaths and landmarks found on smaller, regional scales. In addition, armed with a palette of Sharpies, watercolour paints or highlighters, artistic minds can key their annotations to create a unique collage of colours spread across patches of land, roads, railway lines or otherwise.

These 3 methodsto track the way you travel may seem a little detached from the convenience of having your smartphone do all the work for you in the form of geotagged photos and Bluetooth tracking, but they arguably reintroduce the appreciation and practicality of map reading back into travelling in a fun and creative way, whilst also offering a technique in which to display your travels in your own customisable format.