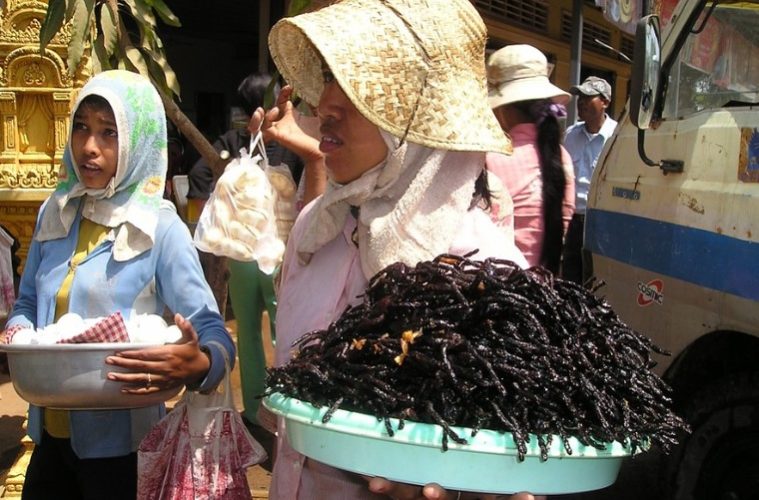 To some, fried spider might just be a snack of nightmares; in Cambodia, the act of frying and eating tarantulas is a cuisine born entirely out of necessity.

In the Cambodian town of Skuon, frying tarantulas became a speciality during the ruling years of Khmer Rouge. Food sources had fallen short, and residents became desperate which lead to them foraging for the spiders in nearby forests. Eventually, the spiders became a speciality and are now bred in holes just north of Skuon. Since the early 1990s, fried spider has become popular with tourists passing through the town, and the delicacy can now be found in other parts of Cambodia such as Phnom Penh.

The spiders are known as the Thai zebra tarantulas and are about the size of the average human’s palm. In Khmer, they are known as “a-ping” spiders, or “edible spider” and have been for over one hundred years. A typical recipe used to cook the spiders involves tossing them in a mixture of salt and sugar. Crushed garlic is then fried in oil until fragrant before the seasoned spiders are added. When the spider is cooked, the legs will become stiff and crispy, while the contents of the abdomen will be somewhat gooey and less runny than before.

It’s no surprise that not everyone is a fan of this regional delicacy; the taste has been described as being quite “bland” like chicken. The texture is quite the contrast with a soft centre and a crispy exterior. The head and body has a very delicate white meat, while the legs are very crispy with very little flesh inside. Most people enjoy eating the legs, but many are not a fan of the abdomen; it also contains a brown-ish paste that consists of eggs, excrement, and organs – some people avoid it, while others hail it as a delicacy.

It seems that the spiders are now available all over the markets in Skuon, and thousands of videos and images of tourists sampling the delicacy have surfaced online – while others would rather not have a large dead arachnid hanging from their lips, dead or alive. The large spiders can sell for up to $1 – this is a rather hefty sum for a country whose national minimum wage is equal to about $6 a day. But regardless, it seems that fried spider has been a roaring success amongst the locals and travellers.