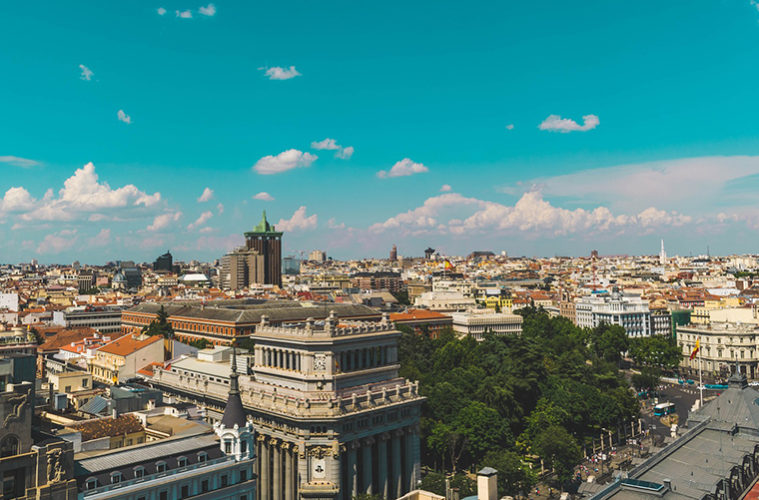 The Markets of Madrid

The Mercado de San Miguel is an astonishing place to be and to witness. It is almost as though someone has scooped up all of Spain and Spanish culture, and has packaged it up, rather hectically yet beautifully, and thrown it into one spot in the middle of the capital, Madrid. I had never been to Spain before this trip, and was indeed reluctant to, as I assumed the most culture I would get, would be sitting by the pool all day, but the markets in Madrid are all I’d recommend now; you see everything at once and there’s not a pool in sight.

Beggars and homeless people sit alone and wallow in their lowly acceptance of life at the steps up to the entrance, aimlessly and absent-mindedly shaking their clear plastic cups, as the fast-paced, blind tourists and families parade in and out of the huge glass doors. I drop a 50 cent coin in a one man’s cup and smile forlornly at him as I turn my gaze and stare in awe up at the enormous sign proclaiming the name. The doors swing back and forth as people keep moving, barging and elbowing; eager to bask in the bright and inviting golden lights inside. I am ambushed with scents of seafood and wine, which tear at my nostrils and toy with me as I traipse up the steps. I hear laughter riding high above the general bustle, like birds on burly winds; elegant wine glasses messily clinking against foaming beer jugs, alcohol spitting onto cheeks, lips and tables. Children run around chasing each other, occasionally taking cover behind a parent’s leg, peeping out every now and then in fits of giggles, as though the leg is a tree trunk in a game of hide-and-seek. Women hold phones to their ears and clunky purses in their hands as they shout their orders to the sweating and faintly aggravated vendors who can’t quite distinguish between “gato” and “pato” for cat and duck respectively.

Fresh fruit gleams and shines in the light, thick sausage fingers reaching down to grab an apple or an orange every now and then, stuffing vegetables into paper bags, punching digits and calling out numbers, clammy hands grabbing notes of cash and sliding dull coins into pockets. The air hangs thick and greasy, a weight down on the people’s backs and an extra burden as they point to the foods they want to try on a platter. There are no seats or tables left, and the combined smells of oyster and octopus mingling with freshly sliced pineapple and watermelon flood my senses and I close my eyes. I hear businessmen chortling, their deep growling voices either agreeing or disagreeing with each other. I hear knives and forks clanking noisily together, scraping against plates and slicing through meat. Both chairs and people are pushed back and forth and a child drops a stuffed olive onto the floor where it is promptly squashed by a waiter’s swift, unfazed, polished black shoe.

I buy a small selection of olives and meats to go, which are packed into a small, clear plastic box along with some toothpicks and a paper towel. I am jostled out just after I place a five euro note on the counter, by other customers eager and vying to get the biggest slabs of meat and cheese, waving wads of cash in their hands. I stumble onto the pavement outside and cross to a bench on the other side. Couples line the streets, kissing or wandering with hands tightly clasped together; their eyes see only each other. Bulky and muscular men stagger around in groups, laughing and shouting; families with children search for a restaurant to eat. I sit on the bench opposite the market and gawk at it some more, my last olive remaining half-eaten on its toothpick. I silently wonder how a market filled with such regular people can be so enthralling, and how it could have struck me as so fascinating. Finishing my food and tossing the oily plastic box into a nearby bin, I make my way home, my mind still encompassed by the hectic beauty of the Markets of Madrid.

The Markets of Madrid | Written by Asalie Balasuriya