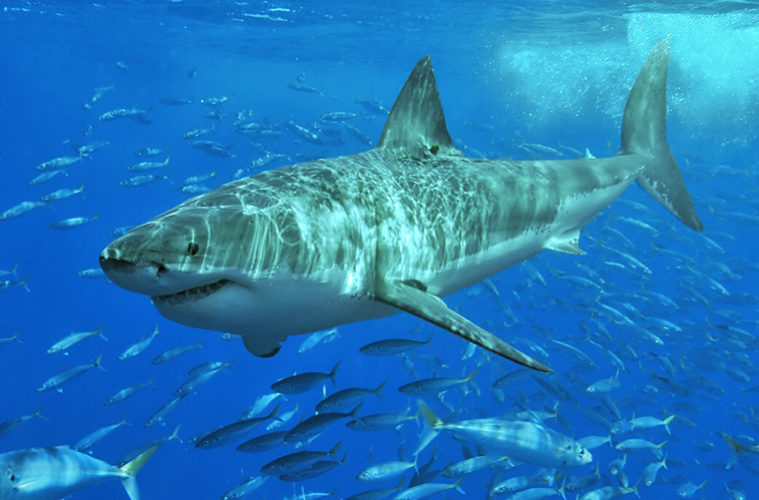 In The Event of a Shark Attack

According to studies and research, more people actually die while taking selfies than they do from a shark attack. Shark attacks are much rarer than films like Jaws suggest – but should you ever find yourself on a beach where attacks are more likely, here’s how you should react…

Check the Beach
Some beaches around the world, particularly Australian and South African beaches, are more prone to shark attacks as the waters are somewhat infested with at least one species of shark or another. You should avoid waters that appear murky at dusk; this is actually a shark’s prime time for hunting and the water makes them harder to spot.

Swim in Groups
As intimidating as sharks are, they are actually much more intimidated by you especially if you swim in a large group; they are much less likely to attack something bigger than themselves.

Don’t Swim With Cuts
If you have a fresh wound, you should definitely avoid the water. While the theory that sharks can detect a single drop of blood in a vast ocean is highly exaggerated, they can certainly smell blood from a few miles off – and it definitely attracts them.

Remain Calm and Still
It may seem easier said than done when you’re staring potential (but very unlikely) death in the face. Sharks typically aren’t interested in people especially if they aren’t moving. But they may be more drawn to someone who is thrashing around in the water.

Stay Upright
A shark’s prey will often be swimming through the waters horizontally i.e. like a dolphin. So if  you keep yourself in an upright, vertical position, they are less likely to mistake you as their next meal…

Slap The Gills
There are many films, such as 47 Meters Down, in which we see the protagonist defend themselves from killer sharks by gouging the eye out or punching it in the nose… But this is far too risky for reality; your hand may be met with a set of very sharp teeth. Instead, in the event of a shark attack, slap or hit the gills as hard as you can – there are a number of very sensitive blood vessels located behind them which will encourage the shark to flee.

Flip The Shark
Unless the shark is bigger than you are, this works by sending the shark into a temporary state of paralysis. It could give you enough to time to get away before it regains consciousness.

Check out these scary creatures you should avoid whilst on holiday!