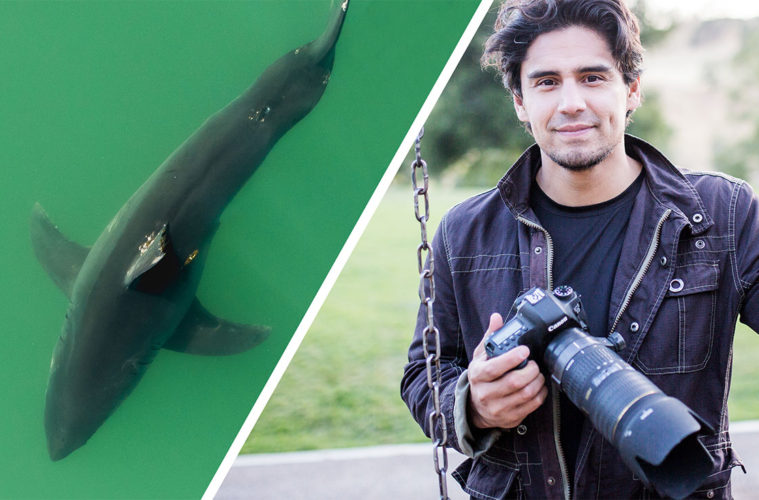 Based in Southern California, Carlos, aka The Malibu Artist, is a professional photographer and FFA certified drone pilot. With much of his time dedicated to bringing attention to the world of sharks, Carlos showcases nature in its rawest form. After creating his YouTube channel in 2013, The Malibu Artist has educated thousands of people about marine life from an aerial perspective. Intending to bring awareness to wildlife and the world around us through his photography and videos, Carlos masterfully combines cinematic elements with educational footage to bring people closer to nature. I had the fantastic chance to speak with Carlos and learn more about his motives, story, and the misunderstood world of the great white sharks.

Hey Carlos, thank you so for this opportunity; your YouTube videos are so eye-opening, especially into the world of great white sharks!

After watching your videos, I was curious – what initially drew you to document these creatures? Have you always been drawn to nature? 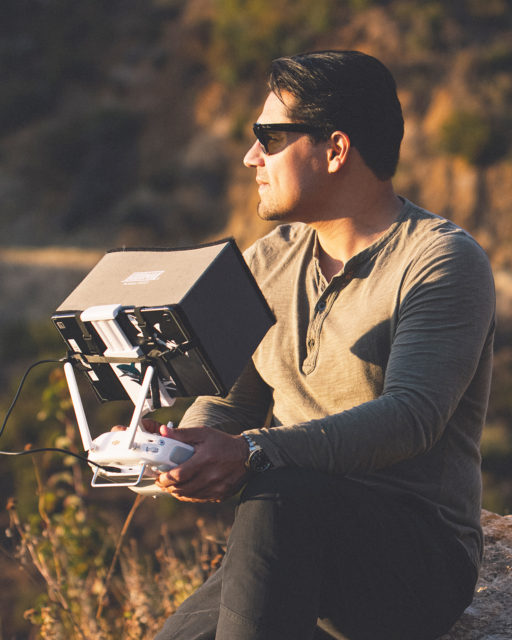 Sharks have always fascinated me. I think most folks, whether they are scared of them or love them, are in some way fascinated by sharks. I first saw a shark while standing atop Point Dume in Malibu. It was a large shark. It ignited my interest in searching for them with my drone. At the time, I spent most of my spring evenings documenting grey whales along the coast. But that sighting made me wonder and challenge myself to find white sharks. That was a little of two years ago. I made it a mission to research and study white shark movements along California beaches. Eventually, I compiled a list of beaches using actual shark encounter data I sourced on the Internet. Eventually, I found white sharks and discovered they were much more common than I ever imagined. I’ve been chasing them ever since. The Covid-19 pandemic shut down much of my photo business, so I dedicated that time to search for sharks where I could.

Has there ever been an instance where something you’ve been recording has taken your breath away?

The footage of white sharks eating a dolphin is breathtaking in a sense. It was nature in its rawest form. But my favourite footage is when I see the white sharks interacting with their surroundings, including dolphins, other sharks, and stingrays. Sometimes they just all seem to hang out together. It’s pretty amazing.

I’m fascinated by the footage you capture of the interactions between sharks and people. Sometimes I have to hold my breath!

Has there ever been a moment where you were on the edge of your seat, worried you might not have been able to alert the people in time?

It’s always in the back of my head, the possibility of an attack. How can it not be when an apex predator is so nearby? I’d say 90% of the time, I’m just too far to warn folks, but I wouldn’t so much say I’m warning them as much as I’m informing them if I’m nearby. I once let a surfer know there were five sharks in the water and to be aware. The surfer thanked me and went surfing. It’s still always somewhat worrisome in the back of my mind because it is a wild animal, after all. But as time goes by and as I document more encounters, I realise the sharks are certainly not interested in eating humans; however, it’s always a good reminder that beachgoers should practice reasonable and safe precautions in known shark waters. You know, swimming in groups, not swimming in the early morning or evening…

It’s a shame, but the film industry often paints great white sharks to be the villain. Thanks to films like JAWS, they tend to be seen as vicious, aggressive animals that attack without being provoked.

How would you describe sharks based on your experiences?

It’s wise to remember that I’m filming white sharks in Southern California. For the most part, these sharks are juvenile and subadult, so their actions and behaviours are likely vastly different from sharks in, say, Cape Cod or Australia. 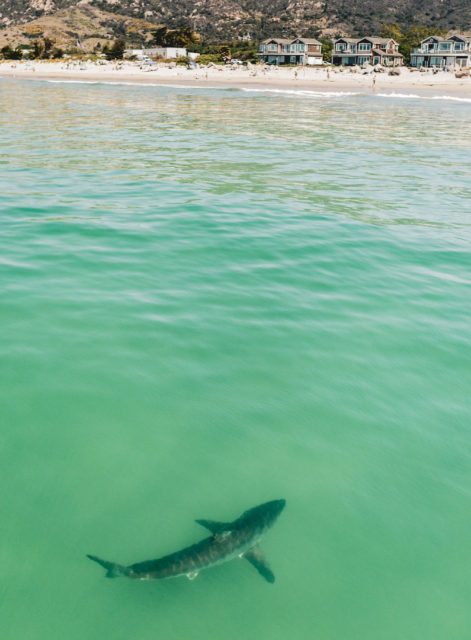 Despite that, white sharks, regardless of age, tend to be curious animals that rarely attack unprovoked. I believe sharks can be vicious, but they aren’t vicious intentionally towards humans. At least the data I see indicates that. Humans are not on their menu. It’s my experience that even with close encounters I’ve seen, sharks still very much prefer to avoid humans.

Unprovoked attacks are rare, and in instances when they occur, I’d go out as far as saying, one must consider all the conditions when a shark attacks—water conditions, visibility, and if the attack occurred on individual swimming alone. Still, we must remember that among sharks, behaviours are very different even at the local level. I just returned from the Sea of Cortez, where I filmed Bull Sharks with a marine biologist. Bull sharks are notorious for being aggressive. But in the Sea of Cortez, their behaviours are vastly different than in the Atlantic, for example.

I’m particularly drawn to your narrative of respecting nature. Was there ever a moment in your life that drove you towards that perspective?

There wasn’t a particular moment, per se. But I’d say it’s more about my perspective in general toward our surroundings. My mother told me that we got caught in a crossfire during the civil war in El Salvador when I was one year old. She could feel the bullets hitting the telephone pole that she hid behind. As an adult, I take that story as a lesson that there’s a whole other world out there where human conflicts and material things are so trivial compared to the beauty of our planet. If more humans took that beauty in, there wouldn’t be as many moments on Earth where a mother has to shield her child from bullets. There are more important things.

Wow, that must have been terrifying. I’m so sorry you both had to go through that. Do you believe this instance shaped how you view the world and what you choose to document?

Hearing examples of my mother’s struggle to give me this opportunity certainly shaped my perspective and view of the world. For me, I truly try to view everyone and everything in the best possible light. Everyone has had some sort of struggle, but not everyone realises the struggles of others. I realise atrocities are happening all across the Earth, and many of those impact the very nature that surrounds us. Take El Salvador, for example; almost 85 per cent of its forested cover has disappeared since the 1960s. 85%!! I returned in 2013 and could not believe how a once rainforest-covered country has quite literally been transformed. Jaguars are now extinct there, as well as many other species as a result. That’s where I came from, and that’s a preview of what will happen to Earth if we keep taking it for granted.  I firmly believe that if more folks actually realised the beauty of the nature around us, that if they experienced what most of us take for granted, we’d all be better off. 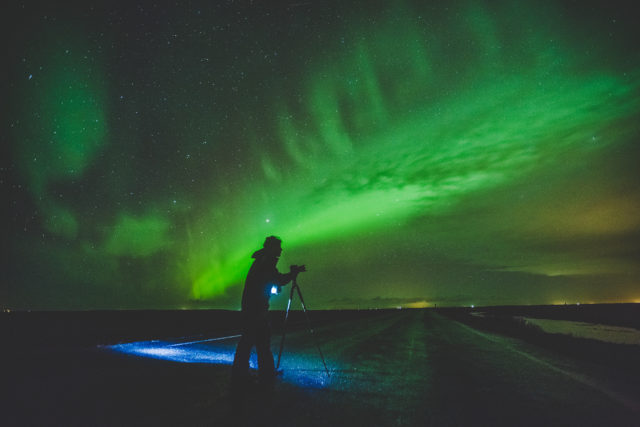 You spoke about there being more important things in the world. Is this the narrative you want people to see in your work, or is there more that you’re trying to convey?

I’m quite philosophical in my own life. What I mean by saying there are more important things in this world is that our world has often placed material things as the gauge of success. Without getting too deep into philosophy, I firmly believe investing in experiences and learning about our environment can reprioritise one’s life. Travel, culture, and experiencing natures beauty…that’s true wealth.

Some of your videos have showcased just how damaging people’s actions can be to nature.

Is there a way you believe we can lessen our impact? 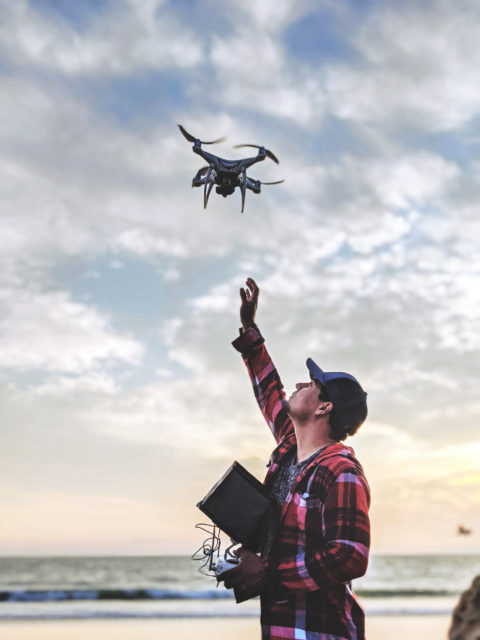 My mantra is respect. We must respect our neighbours and the nature of this planet. As Carl Sagon once said, “it’s the only one we have.” I genuinely believe that most humans take what we have at our doorstep for granted and that it’s not forever. That’s why I love to share the beauty of our nature through videos and photography. If more people were subject to the beauty of our nature, perhaps more folks would be more respectful. Maybe that one person thinking of flicking a cigarette filter on the beach in Malibu would have second thoughts about it if they saw beautiful footage of a grey whale, for example, just feet from the shore. In a perfect world, we’d all be doing our part to keep nature pristine. It’s the small things that compound. Whether it’s a beach cleanup or helping with organisations, or even something as simple as packing your trash away, it’s a collective effort that will make the difference. That concept is not red or blue. I believe it’s a human concept.

Finally, do you have any tips or suggestions for our readers that are looking to travel abroad?

My tip is to research where your impact on nature will be the least felt.  Work and connect with locals. Eco-Tourism is a fast-growing sector these days. Do you need to get on a monster ship to experience what you want? Or is your footprint going to be less by immersing yourself locally? Support local economies, and if you find something special, you don’t necessarily have to share the exact location. There’s nothing wrong with keeping some places to yourself! Also, if you can book trips that go to helping science and conservation, that’s a great way to approach tourism.

If you’re interested in The Malibu Artist’s story and what he does, make sure to check out his social media accounts below!