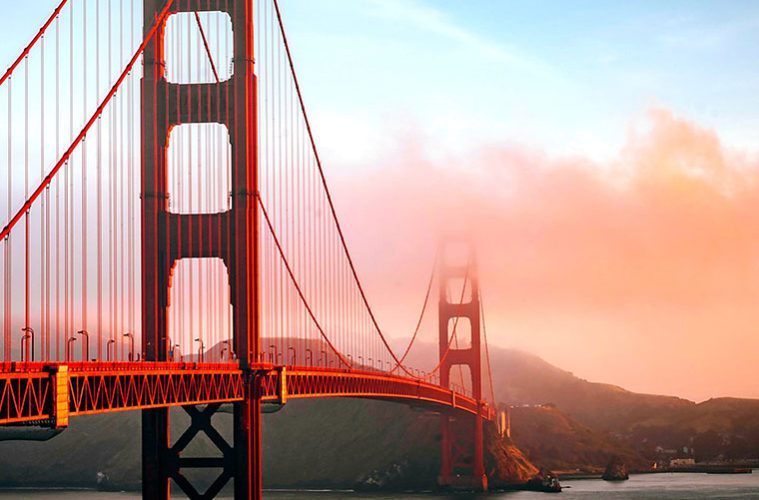 San Francisco: The City by The Bay

San Francisco is one of the most cosmopolitan cities in the USA.

Famous for steep hills, cable cars and the iconic Golden Gate Bridge, visitors to this eclectic city can’t fail to see one of the world’s most infamous prisons nestled in the bay just over a mile off shore.

There’s so much to see and do in the city, but here are three highlights you simply can’t miss.

The Golden Gate Bridge is one of San Francisco’s most famous landmarks. Opened in 1937 at a cost of $35million, the bridge links San Francisco to Marin County, carrying Routes 1 (California State) and 101 (US) and carries more than 110,000 vehicles every day. It was once the longest and tallest suspension bridge in the world, with its towers rising 746 feet, and with a six-lane main span bridge deck of 4,200 feet. Declared a Wonder of the Modern World by the American Society of Civil Engineers, it was described as “possibly the most beautiful and certainly the most photographed, bridge in the world”.

Don’t miss your opportunity to walk this famous structure, which is painted in International Orange (not gold). More than 10 million visitors head here every year, so it can get crowded, especially during the summer.

The sidewalk is open to visitors seven days a week between sunrise and sunset. It takes around 45-60 minutes to walk the 1.7 miles, and it’s advisable to begin your experience at the Bridge Plaza at the south east end of the bridge.

If you’d rather admire from afar, make your way to the Golden Gate National Recreation Area. From here, you’ll get wonderful views of the entire bridge – just set your camera to panoramic and get snapping!

San Francisco’s cable cars are the last manually-operated cars in the world. Only three routes remain of the original 23 lines, but it’s easy to find and board a cable car. Two lines start at Powell and Market and continue to Fisherman’s Wharf. The third starts at California and Market and follows a route to Van Ness Avenue. Look for the brown-and-white cable car sign post to know where to board.

San Fran’s steep hills can make for an exciting ride. Hold on tight, and remember when exiting that the green X traffic signal is a sign for cable cars, not pedestrians. Cable cars do not have accessible boarding, and bikes aren’t permitted aboard.

A little more than a mile off the coast of San Francisco is the island of Alcatraz – translated, its name means the island of the gannets, or pelicans, but its place in history comes from its prison. Prisoners from the US civil war were held here as early as 1861, but the island became a federal prison in 1934. In the 29 years it was in use, some of the most notorious criminal in America were held here. Al Capone, Robert Franklin Stroud and Rafael Cancel Miranda all spent time on “Uncle Sam’s Devil Island”, but none served longer than Alvin Karpis, the only FBI Public Enemy #1 who was captured alive, who served 26 years for his criminal activities.

From Pier 33, board a ferry and speed across the bay to alight on The Rock. Tours available include a walk-in experience where you can step into the cells where maximum-security prisoners were incarcerated; a walk through the recently-restored historic gardens, or even the “best tour of the Bay Area” – a night tour of the island and its buildings.

Buy your tickets in advance – particularly during the exceptionally busy summer weeks – wear warm and comfortable clothing, and don’t forget your camera.