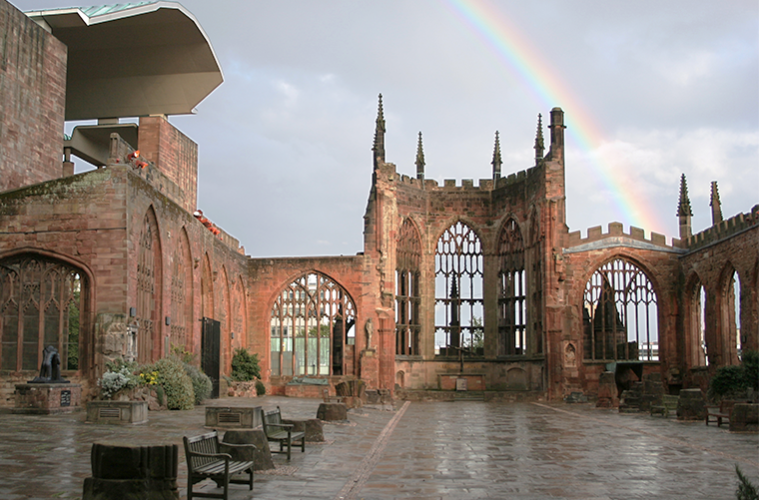 After a raft of promotional campaigns by 5 UK towns and cities, and much hype concerning Hull’s year in the spotlight, Coventry was announced as the UK’s capital of culture for 2021. With a fascinating history and prominent industrial heritage, the West Midlands’ second largest city has plenty to offer, but what exactly should people take note of in the run up to Coventry’s big year?

Many assume that the loss of some of the city’s oldest buildings started as a result of Luftwaffe bombing but in fact the concept of mass redevelopment was being spoken of not long into the 20th Century. Fortunately, despite the intentions of planners and pilots, remnants of medieval Coventry do still exist and offer a tantalising glimpse into a far-reaching cloth trade, religious prominence and an artistic community that arguably inspired a young Shakespeare to pursue an interest in theatre. Today the ageing wooden beams of Spon Street’s 15th Century buildings and the city’s guildhall, dating from 1340 are the best examples of a time before the death, destruction and demolition that occurred 600 years later.

The flattening of hundreds of historic buildings, countless deaths and halting of some of the war-efforts’ crucial manufacturing centres aren’t exactly joyous moments to celebrate during the city’s big year. However, the manner with which Coventry rose from such devastation, to continue its growth into a thriving modern city of the Midlands is one that locals and visitors alike should be immensely proud of. The ability to take the events of the Second World War and reinvigorate the city centre is best seen at St Michael’s Cathedral where the decaying shell of the former 14th century church is now a quiet and peaceful public space, leading visitors into the imposing entrance of the contemporary replacement. The old tower stands as a monument to the resilience of the city’s hope and offers breathtaking views of the surrounding area, while insightful exhibits in the new church offering a chance to reflect and remember those who were lost in the chaos of the Coventry Blitz.

Today cycling is associated with the cities that have embraced the mode of transport as part of day-to-day life. European capitals such as Amsterdam and Copenhagen have become bike crazy in an ever-greener climate as have Bristol, Oxford and many more in the UK, but though Coventry’s roads may not cater for the humble bicycle as well as other cities, its importance in the manufacturing of early push bikes is second only to that of France. Coventry Transport Museum, one of the city’s most popular attractions, hosts a vast collection of cycling memorabilia along with over 200 bicycles from as early as the 1870s. For those with a passion for petrol, the museum also exhibits almost 250 motor vehicles including the record-breaking Thrust SSC and charts the history of the Midlands’ motor industry. Admission is free of charge.

The rebirth of Coventry following World War II marked merely the beginning for a swathe of development projects over the late 20th Century. Pedestrianisation plans during the 1960s of the centre’s shopping areas were some of the most ambitious in Europe and rose with large residential districts to house the number of people employed in the booming motor industry. Post-millennium, contemporary architecture has given the city a further facelift, with the Whittle Arch and nearby Priory Place acting as notable examples of Coventry’s increasing metropolitan vibe. With 2021’s accolade still to provide in the way of funds and exposure, it will be fascinating to see just what the future holds for the UK’s next culture capital.