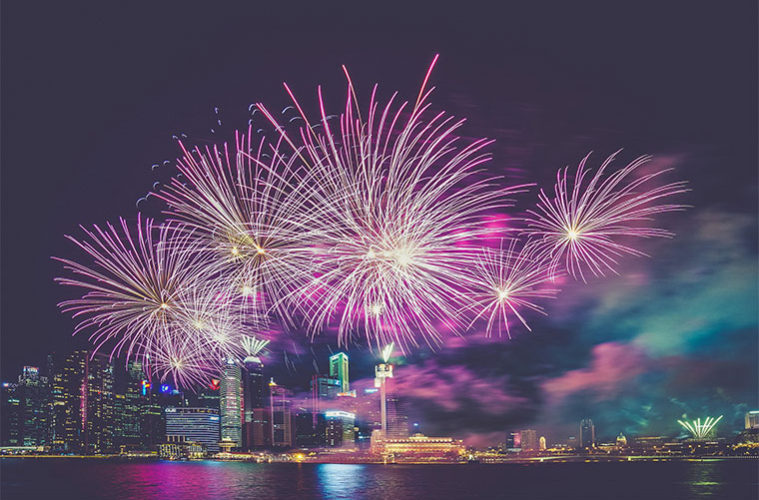 New Year’s Eve, a time when friends, family, and loved ones get together to celebrate often by watching fireworks (possibly on the beach), attending concerts and light shows under the stars, and seeing the New Year in with a bang!

If you still don’t know where you are going to celebrate New Year’s Eve, we are going to give you a few ideas. In this post, we discuss the 10 best cities for New Year’s Eve. From Madrid to Edinburgh, we promise that whichever one you choose will be an unforgettable time.

There are many culinary traditions for Christmas parties, but few countries have a ritual so precise (and so precious) with which to meet the edge of the New Year’s Eve midnight as Spain. There truly is no parallel and talking about Spain then there is no doubt that Madrid is one of the best places to say goodbye to the year… and welcome the New Year! Surely, you have seen it on television a thousand times, but that is not why going to Puerta del Sol to see the bells and take the 12 grapes is less funny. It is a tradition that you will have to fulfill, at least once in a lifetime. Of course, after the last chime and fireworks, it is time to party until the sun rises. Did anyone doubt it?

Fans of cosmopolitan cities and independent music must go to London. With around 500,000 visitors last year, New Year’s Eve in the British capital is one of the biggest celebrations in the world, with a spectacular fireworks show on the Thames. As you go, take the opportunity to enjoy the many activities that fill London a few days prior, such as ice skating rinks or Christmas markets, Winter Wonderland is a specific London event held throughout the Christmas season at Hyde Park from 21st November 2019 to 5th January 2020. This huge and popular festive event is completely free to enter and offers a wide variety of exciting activities and events, from ice skating to market stalls, fairground rides to live music and of course, plenty of festive bars and huts to enjoy mulled cider, hot wine, and amazing food. Dance the night away listening to Christmas music with crowds of people singing, whilst enjoying the tipple of your choice with friends, family and/or loved ones.

The beautiful New Year of Amsterdam offers many surprises. Like the Festival of Light that throughout the winter invades the city of beautiful luminous works of art. Or the street shows and the official celebrations that are mounted in the Oosterdok, where an 18th-century galleon is the scene of concerts and fireworks. To get warm, make sure to enjoy local delicacies such as oliebollen, round sugar-covered pancakes perfect to accompany a good mug of beer.

The City of Lights lives up to its well-deserved nickname throughout the year but, especially, on New Year’s Eve. The Eiffel Tower is the centre of the San Silvestre Festival, which shines with a play of lights and shows that will leave you speechless. Another good idea may be to walk under the lights of the Champs Elysees, between bottles of champagne and the typical papillotes, typical chocolate bonbons covered with a shiny wrapper. Although there is no fireworks castle, the truth is that in the Arc de Triomphe, they mount a spectacle of light and color that will make you care about nothing else. But to really enjoy the magic of Paris, escape the crowd, board a ship on the Seine and dine in the most romantic and surreal way possible in the mythical Moulin Rouge. You could not start the New Year better.

Nothing boring could be expected from the European capital of the night party at the end of the year. More than a million people huddle (literally, the thing is packed) over 2 kilometers, between the Brandenburg Gate and the Victory Column, to enjoy a giant street party with live music, tents, lots of beer, and a fireworks castle at midnight that illuminates the entire city. Hipsters or not, Berliners know how to start a good party.

Snow-covered streets, the triumph of Christmas lights, the most beautiful shopping streets in Europe, and an imperial and royal city that is capable of seducing with a single glance. Vienna is a magical place to spend New Year’s Eve. If you have not had time to get a ticket to the Grand Dance at the Hofburg Palace, surely you have other alternatives such as concerts or a burlesque show on the banks of the Danube. The next day, of course, you cannot miss the famous New Year’s concert of the Philharmonic that you can see on a giant screen in front of the City Hall.

Edinburgh is one of those cities that never ceases to amaze. So, forget about the cold and get ready to live the most incredible New Year’s Eve of your whole life. The Scots call it “Hogmanay” and it is the biggest New Year’s Eve party in the world. Why? Four consecutive days of concerts, dances, fireworks and parades of Vikings with torches that culminate at midnight on December 31 with everyone shaking hands and singing “Auld Lang Syne,” a very touching traditional song. After this festive whirlpool, rent a car and explore the Highlands. It is the perfect plan.

Anyone who thinks that Budapest is a quiet city or that only gets crowded in summer is wrong. Here the celebrations to welcome the New Year last three days and the night of the 31st is only the culmination of a long series of parties and events that will completely shake you. There is a party everywhere, so you can decide between challenging the cold and going outside to celebrate with people or take refuge in one of its coolest bars. The Hungarians, like their Austrian neighbors, also start the year with a concert of classical music at the Opera.

If you like Nordic countries, the cold Copenhagen is heated to celebrate New Year’s Eve in style. In addition to the Queen’s Speech, fireworks take the Danish capital’s skies to light it up brighter than the sun. There are thematic shows, and fire shows every day at the Tivoli, from December 26 to 31. In this way, one of the oldest amusement parks in the world is decorated. In case you want more, around the town hall square, there is also a spectacular pyrotechnic castle at midnight. Although many Danes have dinner at home that day, many restaurants make interesting offers.

The Catalan capital is an ideal place to celebrate the end of the year. Are you going to miss the opportunity to live the joy in the streets of Barcelona? You can choose to go to Plaza Catalunya or Las Ramblas or sit on the beach, but the party is held on María Cristina Avenue, in front of Plaza Espana, with a musical show designed by the theater group Fura dels Baus. Take the 12 grapes looking at the beautiful National Museum of Art of Catalonia in Montjuïc, watch the fireworks, and then party to start the New Year on the right foot.